Looking to minimise the TCO on a replacement electrostatic precipitator (ESP) system, flooring manufacturer Polyflor has chosen an innovative new design from ThermTech. Judged to be the most cost-effective option to remove plastisol emissions from flue gases, the new ESP unit incorporates a revolutionary cleaning system that effectively eliminates down-time for maintenance.

Polyflor is a leading producer of PVC flooring and has been manufacturing in the UK since 1915, as such the company takes its environmental responsibilities very seriously. It is constantly looking to improve its carbon footprint and that of its suppliers as well as minimising its impact on the environment.

ThermTech was involved in installing a 16,000 CFM, triple-stage air pollution control (APC) unit at Polyflor’s site in Manchester over 25 years ago. Over the years ThermTech has continued to provide technical support for that unit, which had now reached the end of its service life. The quality and engineering support aspects of what ThermTech could provide were therefore well established, the decision came down to which technology suited the application best.

Regulations and standards relating to air pollution have been tightened since the original APC installation and now Polyflor needed to find a replacement unit that would meet future standards. There were essentially five options available: a high efficiency Venturi scrubber, a biological scrubber, a coalescing candle filter, an incinerator or a new ESP. The venturi scrubber, coalescer and the incinerator have very high energy costs associated with them while the biological scrubber requires a large area for the installation.

In the past ESPs had developed a reputation for being very efficient to run and very effective, but costly to maintain due to the cleaning requirement. In fact, ESPs have the highest collection efficiency for sub-micron particles, the ability to recover the captured products, and the lowest electrical running cost per unit volume of air throughput of any of the five pollution control devices. 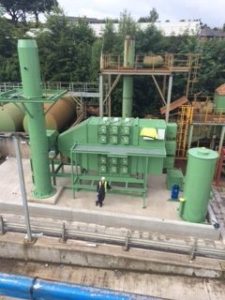 ThermTech approached Polyflor with a proposal to install a pilot plant that could be used to evaluate the technology.

However, the efficiency with which Electrostatic Precipitators can remove solids, moisture and thermal degradation products from flue gases causes the precipitator and its associated gas cooling equipment to eventually become blocked. This requires them to be cleaned, sometimes off-site, which until now, resulted in downtime for the manufacturing process they are associated with.

ThermTech had completed a considerable amount of research into solving this problem and now there was an opportunity to prove the theory. ThermTech approached Polyflor with a proposal to install a pilot plant that could be used to evaluate the technology.

Successfully winning a government development grant, ThermTech manufactured the prototype equipment and installed it at Polyflor’s Manchester site, where it was connected to a stream of flue gas. Over a period of several months the process was fine-tuned until the Electrostatic Precipitator cells could be washed periodically, or on demand, automatically and be brought back online within 2 minutes of the cycle ending.

Lionel Macey, Technical Director at ThermTech, comments: “The process was closely monitored and found to remove 99.5% of contaminants from the flue gas stream, while the new automated cleaning process enabled this to remain a continuous process. By removing the need for periods of downtime to disassemble the unit to manually clean it, ThermTech has re-established electrostatic precipitators as a prime low energy abatement plant (LEAP) product.”

Following the successful conclusion of the pilot scheme ThermTech has applied for a patent for the technology in the cleaning process, which was one of the conditions attached to the government loan. It has also designed, built and installed a full-scale, 20,000 CFM, triple-pass plant for Polyflor.

The new system uses a full wash cycle every 6 hours and has been operational 24 hours a day, five days a week, for the last 14 months, without any loss of performance. The system includes a range of sensors that continuously monitor the emissions from the flue chimney and provide real-time data to the Polyflor maintenance team.

The data from the sensors is also monitored and logged remotely by ThermTech to ensure continued performance of the cleaning system. Furthermore, the local council has carried out independent environmental monitoring of the flue chimney and agreed completely with the data provided by the ThermTech installation.

Lionel Macey concludes: “This country needs efficient cost-effective manufacturing facilities to remain competitive on a global scale. We also must meet targets for environmental protection. This project has made a major contribution to reducing the cost of pollution control equipment for those using PVC in their manufacturing processes. The technology that we have developed has proven its reliability and Polyflor is keen to see it used in another site very shortly.”

Government schemes for reducing pollution are not always well received by industry, mainly because additional investment is often required to comply with new regulations. However, at the same time there may be assistance with the development of new and existing technology including ESPs, which can reduce costs and improve the performance of pollution control equipment. […]