Government schemes for reducing pollution are not always well received by industry, mainly because additional investment is often required to comply with new regulations. However, at the same time there may be assistance with the development of new and existing technology including ESPs, which can reduce costs and improve the performance of pollution control equipment.

Lionel Macey, Technical Director at ThermTech, looks at one solution that will significantly reduce the costs associated with an electrostatic precipitator and the benefits this will have for industrial processes using plastics and PVC.

Environmental legislation has become increasingly more stringent over the years and this has created a need for improved pollution control systems. To encourage large industrial emitters to embrace new innovations, the government introduced the concept of best available technology not entailing excessive cost (BATNEEC).

One of these technologies is the electrostatic precipitator (ESPs), which has the highest removal efficiency of any pollution control system for oily, sub-micron smoke fumes. In addition, it has the lowest energy consumption per unit of gaseous throughput for any system on the market. As such, it would appear to be a strong contender for the plastics industry.

However, the small amounts of solids, moisture and thermal degradation products that invariably accompany the oily smoke can build up on the surfaces of the heat exchanger. This will eventually result in the precipitator, and its associated gas cooling equipment, becoming blocked and causing the ESP to lose its electrostatic properties.

The electrostatic process removes any dust entering the system just as efficiently as it does the sub-micron oily smoke particles. The disadvantage of this is that whereas the collected oils will run off the collector cell plates, the dust can build up and, if mixed with water, will form greasy deposits which will eventually bridge the plates and cause a loss of collection efficiency. However, in an industrial environment it is not possible to eliminate dust and humidity prior to the ESPs. 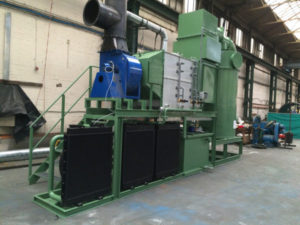 An additional problem with electrostatic precipitator systems is associated with the processes in which they are operating. In a PVC processing plant for example, the high temperatures involved can bring about the thermal degradation of the PVC and the evolution of hydrogen chloride (HCl) gas. Although only appearing in small amounts, this gas can dissolve or attach itself to the liquid plasticiser droplets and cause them to become electrically conducting and so lose their electrostatic removal properties.

In some cases, the acidic conditions can result in the reaction of HCl with plasticiser to produce phthalic acid and the corresponding alcohol. Phthalic acid deposits as an amorphous solid which is insoluble in the base plasticiser and will block up cooling heat exchanger surfaces or ESPs collector cells. Removal of the phthalic acid deposits can only be achieved by washing with hot detergent water, which results in a lot of downtime, for either in-situ or off-site cleaning, with significant attendant costs for maintenance and effluent disposal.

With considerable expertise in heat exchangers and electrostatic precipitators (ESPs), ThermTech took up the challenge to minimise the maintenance costs and return this equipment to its rightful place as the best available technology. The company has created a patented cleaning and product recovery system that has virtually eliminated all the disadvantages of the ESPs.

The project started with a government development grant to build a pilot unit that could be scaled up once the new technology had been proven. With the help of a company involved in the manufacture of vinyl flooring, the prototype system was connected to a stream of contaminated flue gases.

The hot flue gases pass upwards through a vertical packed column which is cooled by a liquid plasticiser travelling in the opposite direction. The hot liquid collects at the base of the column where it is filtered and cooled before being recirculated back to the column. The continuous circulation within the column ensures that any solids are removed and do not cause deposition problems in the electrostatic precipitators. 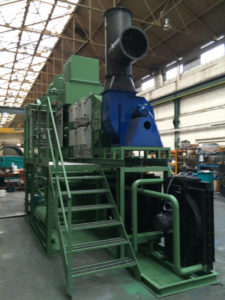 The process has been found to remove 99.5% of contaminants from the flue gas stream and the new cleaning process enabled this to remain as a continuous process. Ultimately, the development of this new technology has made a major contribution to reducing the costs associated with pollution control for industries using plastics and PVC in their manufacturing processes.

The process was optimised to ensure that the plasticiser concentration entering the electrostatic precipitator did not overload the power packs. The recycled plasticiser was dosed with small amounts of various miscible organic bases in order to neutralise the HCl; conductivity sensors were used to check for neutralisation in the recycle line.

The clean condensate from the second and third passes was collected in a separate clean tank that was continuously kept clean by passing it through a special off-line oil filter. The clean tank collected small amounts of submicron carbon particles that were removed by the oil filter.

The complete ESPs was modified to include wash spray bars on each individual collector cell. Periodically, or on demand, each bank was washed with warm, clean, conditioned condensate, after disabling the low tension power supply. It was found that the washed cells could be brought back online within two minutes of the wash cycle ending.

Scaling up for industry

Having proven the technology in a pilot scheme, the conditions of the government loan required ThermTech to apply for patent protection and to upscale the project to exploit it commercially. Having seen the success of the research project, the flooring company that had volunteered its facilities was keen to take advantage of the new technology.

As part of a replacement program for the existing pollution control equipment that had reached the end of its service life, ThermTech was contracted to install a 20,000 CFM triple pass unit incorporating all the modifications that had been developed.

The new system uses a full wash cycle every six hours and has been operational 24 hours a day, five days a week, for the last 14 months, without any loss of performance. The system includes a range of sensors that continuously monitor the emissions from the flue chimney and provide real-time data for the maintenance team.

The process has been found to remove 99.5% of contaminants from the flue gas stream and the new cleaning process enabled this to remain as a continuous process. By removing the need for periods of downtime for the manufacturing process, ThermTech has re-established electrostatic precipitator as a prime low energy abatement plant (LEAP).

Ultimately, the development of this new technology has made a major contribution to reducing the costs associated with pollution control for industries using plastics and PVC in their manufacturing processes. In addition, the ability to operate this process continuously will make it very attractive when compared to existing, legacy equipment.