Economisers have the potential to slash the energy and environmental costs from boilers. However, the way economisers are designed and manufactured plays a major role in determining to what extent they can lower a boiler’s energy requirement and environmental impact.

It’s tempting to think that one economiser can fit all boilers. However, if we aim to maximise the energy and environmental savings, the economiser should be built to suit the specific boiler design and the way in which it operates. In fact, one single economiser design can’t provide optimum heat transfer and adapt to different applications, like industrial boilers, CHP engines and plant turbines, process plants, or thermal oil heaters.

What are the most important aspects you should be considering when selecting an economiser?

Traditional economiser designs are based on boilers that operate continuously at maximum flow rates. However, if the system operates with variable flow rates, these economisers may not be as efficient. Therefore, traditional ‘gas down-water up’ arrangements with a series of small finned tubes coming off a large manifold may not always provide the best hydraulic and venting performances.

In fact, for industrial shell boilers, with flue arranged vertically or horizontally and that run with a fluctuating five to one turn down ratio, the best economiser should be designed as a single tube arranged in a series of serpentines. In this way, both sludge build-up in the lower tubes and poor distribution of water at low flow rates are avoided.

This solution may have a higher upfront cost, but return on investment can occur quicker, as higher energy efficiency, i.e. fuel saving, is achieved.

What are the arrangements for different fuel types?

Economisers are mostly used for gas applications; however, they may be installed in systems where oil or digested gases are used as fuel types. In this case, a few considerations should be made.

When (sulphur-free) oil is used, it might be better to widen the fin spacing in economisers to easily remove oily or sooty deposits. Nonetheless, oily deposits often burn off without leaving a trace when economisers return to gas firing.

Biogases, such as anaerobic digestors or land fill gases, used within the boiler may contain sulphur, which can condense on economisers and produce sulphuric acid and subsequently corrode the device. In this case, it is necessary to design an apparatus that either removes sulphur prior to combustion or ensures that the biogas is well mixed with natural gas to avoid sulphuric acid formation. 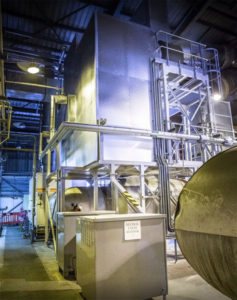 If we aim to maximise the energy and environmental savings, economisers should be built to suit the specific boiler design and the way in which it operates.

How are pump bleeds integrated with other components?

Orifices or bleeds on economisers ensure a small water flow through the devices at all times. For instance, if the modulating valve closes but the burner keeps on firing due to delayed burner times, the bleed takes away the excess heat and prevents boiling. The bleed should be placed on the outlet of the economiser to protect both the economiser and the boiler feed pump.

Poorly designed bleeds can have low durability, i.e. quickly erode and subsequently damage the boiler, cavitate the feed pump and overheat the hotwell. In addition, if these bleeds are associated with electric solenoid valves that only open when the modulating valve is closed by 90%, hotwell overheating may occur, as hot water is returned to the hotwell but the cold make up water is brought in at a slower pace.

What kind of finned tubes are used?

To increase the heat transfer efficiency, tubes are equipped with extended surfaces, in the form of fins on the gas side. The way fins are attached to the tubes further affects the heat transfer efficiency. More precisely, heat transfer from the fin to the tube depends on the efficiency of the contact. Therefore, good economiser design should aim to maximise the contact between the finned surface and tubes, thus favouring fins welded on tubes to other attachments, e.g. grooved and peened- or tension wound- tubing.

In addition, as the temperatures of tubes and fins differ, the two components’ thermal expansion and contraction should be considered. Also in this case, welded finned tubing are the tubes of choice. In fact, in tension wound tubing the thermal contact is lost, while grooved and peened tubing causes condensation, which promotes local corrosion and a breakage of the fin-tube attachment, which results in a loss in heat recovery.

What certification do the economisers hold?

Important guidelines for the design and manufacture of economisers include BS EN 12952:2015 on water-tube boilers and auxiliary installations. This standard replaces BS 1113:1999, the specification for the design and manufacture of water-tube steam generating plant (including superheaters, reheaters and steel tube economizers). In addition, the CE marking shows that the appliances comply with the requirements of the Pressure Equipment Directive 2014/68/EU (PED), which replaces PED 97/23/EC.

To achieve optimum heat transfer, no two economiser systems are the same. Therefore, an experienced manufacturer is required to create custom-made designs. ThermTech has been designing, building and installing bespoke economisers that meet the design of any boilers for over 25 years. The company’s economisers are manufactured to BSEN 12952, PED Certified and CE marked. ThermTech also received the ‘Best Innovation’ award by the Department of Economic Development for its implementations at a hospital on the Isle of Man.

Government schemes for reducing pollution are not always well received by industry, mainly because additional investment is often required to comply with new regulations. However, at the same time there may be assistance with the development of new and existing technology including ESPs, which can reduce costs and improve the performance of pollution control equipment. […]