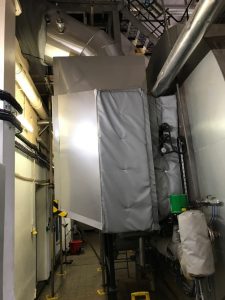 Heineken has five production locations in Britain with its Manchester Brewery being one of its key facilities.

Situation: We were asked by Heineken to design, manufacture and install an economiser on two steam boilers for the Royal Brewery in Manchester as part of an overall project to reduce energy consumption and cost.

Solution:  The two 15 tonne/hr twin burner steam boilers run at 10 bar g on an 80/20 mix of natural gas and anaerobic digester gas. The economisers preheat the boiler feed water from 94 to 120°C saving approximately 5% in fuel usage at the burner for the same steam output.

One particular feature of this system is its retrofit installation. The rear of the boilers are located very closely to the rear wall of the boiler house and there is only a short length of flue ducting between the boiler exhaust and the chimney. We customised the flue gas inlet box so that the economiser fitted directly onto the rear smoke box of the boiler. The two separate exhaust gas streams from the boiler pass horizontally through the economiser and into a new rear gas outlet box where they combine and rise vertically to mate with the existing flue duct. The whole installation was no deeper than the original rear smoke box.