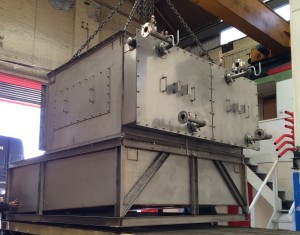 The Mill had a Steam Turbine CHP Plant, over the years the power to heat ratio had moved to the power side and the two 10 Tonnes HP water tube boilers were both being run inefficiently at 55% of MCR.

A 1MW gas fired engine/generator was installed and an economiser was fitted into the exhaust gas flue.

This preheated boiler fees water to within 20 degrees of saturation temperature, even though the water Tube Boilers were already fitted with their own economisers.

This system allowed the original CHP Plant to run on one boiler at maximum efficiency and the cost of power generation was substantially reduced.