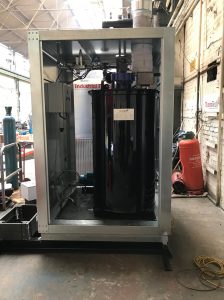 While the capital cost of electrical thermal oil heaters is much less than gas fired ones the running costs of the oil fired units are far less than the electrical units.

If required process temperatures are above 150ºc then it is better to use thermal oil heaters rather than steam boilers. Often the heat load required is quite small, up to 100KW, and for simplicity these units are often bought as electrically heated items using immersion elements. The capital cost of electrically heated units is usually less than for gas fired units and the thermal efficiency is virtually 100% whereas a gas fired unit requires 140KW input to give 100KW output. These two points often favour the preference of electric rather than direct gas fired heaters.

Recommendation: If the operating costs of both are considered a different scenario exists. Current gas and electricity costs are 2.7p/KWh and 12.8p/KWh respectively. So the cost of running a 100KW heater for 8hours/day, 5 days/week, 50weeks/year are £25,600/year for electricity and £7,600/year for gas. A massive saving that will pay for the extra capital cost of a gas fired unit well within the first year of operation. On the above premise we manufactured a small direct gas fired thermal oil heater as shown on the photograph for a research laboratory as part of a package where they needed hot air, hot water, freezing cold water and a high temperature heating facility.  Enclosed in its own container and incorporating an oil pump and expansion tank it is a packaged unit ready to go.